“You discovered a species, possibly non terrestrial in origin and you kicked its fuckin’ ass.” - Ron

“This is too much madness to fit into one text!” – Jerome

In recent years the alien invasion film has been pushing at the studios imposed limitation’s on the genre. Defying expectation guerilla productions like Gareth Edward’s Monsters, Neil Blomkamp’s District 9 and Matt Reeves Cloverfield ration the fantasy elements replacing them with something uniquely satisfying in the form of genuine feeling. Continuing the trend, there is much to admire in the low budget British sci-fi/comedy Attack the Block. 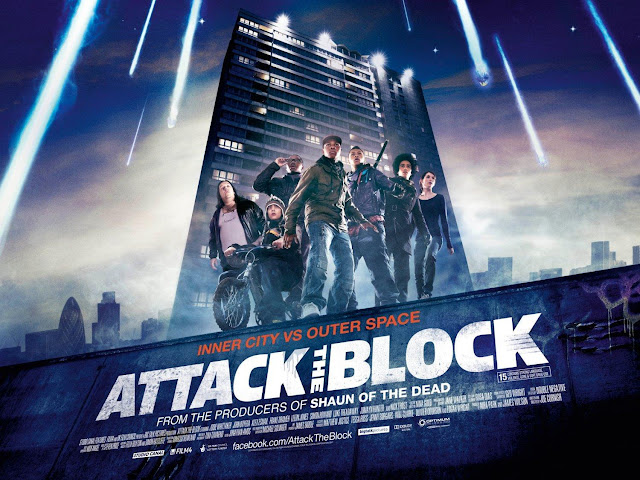 Wisely Produced by Edgar Wright, (Hot Fuzz, Shaun of the Dead) and directed with disarming aloofness by writer (Spielberg’s Tintin) and sometimes actor (Hot Fuzz) Joe Cornish, Attack the Block is a festival favourite that succeeds because of its simplicity of design and what would have been sly social conscience.

Startled at first, soon the chavs make a shocking discovery. The comet housed an alien life form that is loose in their hood. Armed with bats, sticks and any scrounged weaponry they have stashed they eventually corner the beast in a small shed and beat it to death. E.T. homicide inadvertently places the boys in the middle of an interplanetary migration and now these Pom-Gangsta Goonies must defend the earth or be torn apart by the shadowy teeth from outer space.

John Doe says:
An easily invested in 88 minute distraction that coincidentally carry’s more relevance than initially intended becoming somewhat prophetic. The well acted story keeps focused in scope and never forgets to entertain. The less is more FX show how effective rudimentary imagery can be. It’s not about the spectacle, but the committed to cinema universe that’s bonded by demonized hoodies and extraterrestrial ooze that makes for a refreshing close encounter. By the finale you’ve laughed, occasionally gasped and even cheered the questionable underdog.

An unintended postcard to a time purely because of its open minded approach, the London Riots punctuate the limited but necessary social commentary. Glimpsing at the circumstantial effects of fractured family lives, raised in poverty against systemic clashes with law enforcement there is an inevitable anti-authoritarian “look out for your own” principle that bolsters the inner city realities of life humor. The wry comedy manipulates stereotype keeping the undertone light without sacrificing the edgier elements of Cornish’s amusing screenplay.

According to an interview at screentrant Cornish wanted a “John Williams meets John Carpenter” score by Steven Price (Scott Pilgrim versus the World) to signal the family adventures of the 80’s and the abortion of suburban innocence makes for snickering geek nods. Gradually winning our sympathies by the time the loud action finale explodes onscreen the pyrotechnics linger just long enough to fade to black on the block, exiting before the smoke clears.

Wisely avoiding overload with a larger plot conspiracy allows for time spent on character and the performances of the cast of mostly new comers impresses. Each bringing a distinct voice to their parts and as already stated on numerous other sources, the standout is John Boyega as the reluctant hero Moses. Pulling off nonchalant swagger with charisma his puppy dog hoodlum uses silence to add complexities to the role.

In real life Pest would be annoying as hell but thanks to sincerity and a cast to type debut performance from Alex Esmail he miraculously charms. Likewise, Luke Treadway (The Whistleblower) makes the uncoordinated, cowering Brewis into a lovable nerd. Jodie Whittaker (One Day) takes the stuffy nurse lone adult cliché and gives her Emily Mortimer type quirky strength.

Amusing John Doe with its cunning avoidance of the productions hazardous limitations (read limited visual budget) Attack the Block is lifted by imaginative Direction that never tries to be epic when it can be intimate nor too clever at the expense of a laugh.