Let Us Know About Ikat

Ikat is an ancient technique used to pattern textiles. The defining characteristic of ikat is the dyeing of patterns before the weaving of the fabric takes place. The patterns are created by means of a resist dyeing process on either the warp or weft fibres, or on both.

Inception and History
The system which is referred to today as Ikat had its birthplaces in various pieces of the world, for example, South East Asia. We will here look at cotton warp ikat, the technique most common in the Indonesian archipelago. 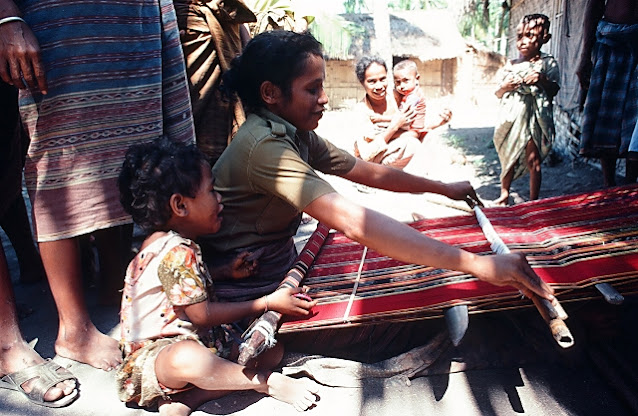 Spinning, where it all begins
One of the most fundamental skills required to produce a high quality ikat, is spinning. While spinning wheels have been introduced in some parts of Indonesia, spindle spinning is still practiced in many parts, especially on the more remote islands, such as here on Alor. In that respect not much has changed since 1932 when Ernst Vatter wrote in Ata Kiwan: "... in those areas where there still is much weaving, you rarely see women or older girls without their 'handiwork', the spindle, which they diligently spin during every pause that their other work allows."

The thread produced by means of a gravity or drop-weight spindle is called benang putar, and textiles made of it are generally highly appreciated, both by locals and by collectors. The evenness of thread that an experienced spinner can achieve with a spindle is stunning, yet one can always feel the difference between commercial, factory made yarns and hand spun yarns by passing it through the fingers and paying attention to the minute differences in thickness that betray the old handwork.

Ikat Weaving
The Ikat is a traditional hand woven cloth from Indonesia. The word ikat, meaning to ‘tie’ or ‘bind’ in the Indonesian language, implies the process of weaving. Ikat-making includes several stages: spinning the thread, binding and dying the thread; stringing the loom and weaving the cloth. Typically cotton or silk hand-woven thread is used, coloured with natural dyes, such as a native Indonesian indigo plant, Indigofera sumatrana, a common source of blue-black tint and variety of other local dyes. The weaving is done on a back-strap or shaft loom to create intricate cloth designs.

Back-strap or body tension loom. This is one of the earliest loom types, once common throughout the Indonesian Archipelago. This loom takes its name from a back-strap by which weaver’s body holds the warp threads in place and adjusts their tension. The loom is made of two bars with a back-strap passed around the weaver’s back and secured to the breast beam. The weaver controls the tension of the warp thread by leaning forward or back. These types of looms were easy and cheap to make and did not take up much space for storage.

Shaft loom or frame loom. This non-mechanical loom consists of a wooden box-like frame with a flat warp beam slotted into a pair of supports, suspended from a cross-bar. The frame loom allows tension of the warp thread to be regulated by the beams, without a need for a back-strap. This loom became increasingly popular during the colonial period in Indonesia and slowly replaced the traditional back-strap loom. It allows textiles to still be produced by hand, but at a much faster rate and so they are favoured by weavers who make the ikat for the market. Shaft looms also allow for different types of textiles to be created. For example skirts no longer needed to be produced as two panels and sewn together, but could be made as a single piece. Although the shaft loom became more widespread in Indonesia, cloths for ritual or ceremonial use are still made using the traditional back-strap loom.

Ikat – the word, borrowed from the Indonesian language, describes the method of weaving that uses dyed threads to produce coloured patterns, as well as the type of fabric made in this process.

Warp is the set of threads running lengthwise in the loom (or vertical threads).

Weft is the set of threads that are woven across the loom (or horizontal threads).